Tim Doucette has always looked up.

“As a kid I always used to look up at the moon because it was the only real thing I could see in the sky.”

The owner of Deep Sky Eye Observatory, located in Quinan, Nova Scotia, was born with cataracts, and completely blind until a surgery at 18 months gave him 10 per cent vision; something his parents only realized, he says, once they saw him react to a lightbulb. 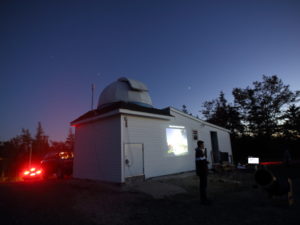 Building a life and business around looking through a telescope is an unusual career choice at the best of times, but all the more impressive for someone with only 10 per cent vision. But approaching challenges head-on is nothing new to Tim.

By the time he was 12, Tim – who had navigated the public school system with the help of an itinerant teacher – had his first telescope. By that point he had also lost half of his remaining vision, having dropped down to 5 per cent due to cataract regrowth.

“I kind of lost courage [at that point] because even with the telescope I really couldn’t see anything. It was difficult.”

That loss of courage translated into a move away from stargazing and towards computers – like astronomy, not an obvious direction for someone with limited vision.

“I fell in love with writing computer programs and by grade 7 was writing programs for the school and the other kids.”

That love of computers translated into a career in computer science, and after a few years working in Halifax, in 1997, Tim and wife, Amanda – also legally blind – moved to Ottawa. In 2001, the family moved to Moncton, where, in 2003, Tim got back into astronomy, as a result, he says, of his wife’s push to get him outside and away from computers and video games.

“She opened up Pandora’s box. She got me a telescope in 2003 because Mars was going to be at its closest point to earth in 30,000 years and she thought it would be a great idea,” he says. “I had a chance to look at Mars and it lit up a spark again.”

It was at this point that Tim, who had begun stargazing with a friend from the Royal Astronomical Society of Canada, realized something was up.

“We went to a dark sky site and as the night went on, I was seeing things that he wasn’t,” he says.

During a trip to Halifax, he reached out to his eye specialist and discovered that a surgery at 16, which had given him back the five per cent vision he’d lost, had also given him something unexpected.

“I ended up being able to see the night sky in a very unique way – something I didn’t clue into at the time,” he says.

That unique way was as a result of the lenses in his eyes – which act in part as a protective UV filter – being removed. That, combined with a permanent pupil dilation, led to his retina being exposed to light it had never seen before. 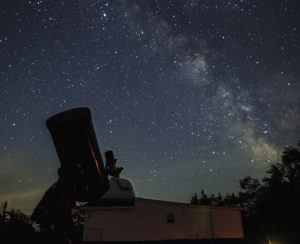 “Seeing flowers around sunset and especially daisies, they look a little purple because flowers emit ultraviolet light to attract bees,” he says.

The first iteration of Deep Sky Eye came about in New Brunswick, where Tim joined the Royal Astronomical Society of Canada and became the national rep for NB Centre – precursors to his leap into the world of astronomy and astrophotography, when he opened a Moncton-based observatory with a monthly open house.

In 2014 Tim and family made a move back to Nova Scotia, taking up residence in a family home in Quinan. The next year, Deep Sky Eye 2.0 was born.

“We moved and I knew right away that this was a perfect spot for the observatory,” Doucette says.

In 2013, while still in Moncton, Tim was approached by Trout Point Lodge, who were working to get Southwest Nova certified as a Starlight Tourist Destination from Spain’s Starlight Foundation.

“I knew the skies were dark here and after Southwest Nova was approved, we were awarded the first Starlight Tourist Destination designation in North America,” he says. 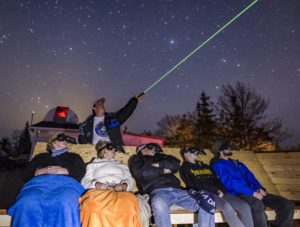 “I jumped on the idea. And for me, the biggest thing is being able to help other businesses in our area actually take advantage of the night sky to start their own stargazing tours, or whatever it happens to be,” he says.

Deep Sky Eye is now an international destination with accommodations which include a cottage and three sky bubble tents; allowing visitors to fall asleep as they stare at the night sky through a clear vinyl opening. He’s also partnered with National Geographic in augmented reality night sky observing: goggles with a glass visor which pair with a cell phone, reflecting constellations and names of stars as you move your head and look at the sky (not being offered this season as a result of COVID precautions). 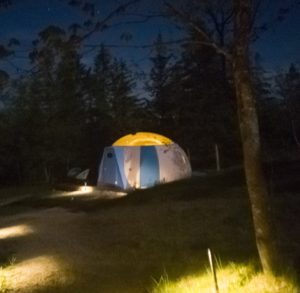 But like so many Nova Scotia tourism businesses, he’s been hit hard by lockdown.

“This whole COVID thing really smashed us this last year or so,” he says.

In 2020, they moved the entire operation out of doors – projecting the night sky onto the side of his observatory. The experience includes a 30-minute presentation, a laser tour of the sky, and a live view of what his telescope sees. And true to form, he was able to teach himself 3D printing and now prints off individual or group eye pieces to stay in line with COVID protocols. Both he and Amanda have also been vaccinated and completed the Clean it Right program – through TIANS.

And in terms of who comes to gaze upward, Tim says it’s a mixed bag.

“Some people are into the night sky – physics professors and their families, but then you have the average person who doesn’t know anything about the night sky but they’ve always wanted to see something cool through a telescope; it’s the wow factor, like seeing the rings of Saturn for the first time, or seeing the Milky Way – with no telescope,” he says.

And at the end of the day it’s really just about the experience – for both Tim and his visitors.

“My whole life I’ve asked people what they saw. Now I can return the favour.”

In 2019 Deep Sky Eye Observatory was a TIANS Crystal Tourism Award winner – receiving that year’s Parks Canada Sustainable Tourism Award. For more information or to book a spot for your chance to visit the night sky, go to deepskyeye.com