Effective April 22 at 8 a.m., people from outside Nova Scotia, Prince Edward Island and Newfoundland and Labrador will not be allowed to enter Nova Scotia unless their travel is essential or they are permanent residents of Nova Scotia.

“This is not the time for people to come to Nova Scotia for anything other than essential travel,” said Premier Rankin. “Given that the pandemic is now being driven by variants that transmit more easily, this strong action is necessary to protect Nova Scotians.”

The following types of travel from outside Nova Scotia, Prince Edward Island or Newfoundland and Labrador are considered essential:

“We won’t turn away permanent residents of Nova Scotia if they travel, but we are giving strong direction to not travel unless it is absolutely necessary,” said Dr. Strang. “This is a critical time for us to cut off travel-related cases at the source. I am asking all Nova Scotians to put their plans aside and follow this direction.”

Details are being finalized on further requirements for people who must isolate after essential travel and will be shared soon.

Rotational workers must now fully isolate when they first arrive in Nova Scotia. Once they receive their first negative test result, they can switch to modified self-isolation. Specialized workers will only be allowed for critical infrastructure work.

Travel from outside of Atlantic Canada will not be allowed for funerals for a four-week period and will only be approved under exceptional circumstances for end-of-life visits.

Anyone isolating in Nova Scotia after travel within Canada should get tested at the beginning and end of their isolation.

Anyone who is not required to isolate should get tested three times in their first 14 days home in Nova Scotia.

The Mental Health Provincial Crisis Line is available 24/7 to anyone experiencing a mental health or addictions crisis, or someone concerned about them, by calling 1-888-429-8167 (toll-free) 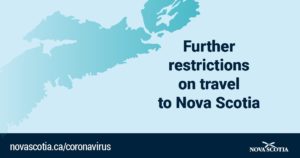 Next Post TIAC - March Update - State of Tourism in Canada